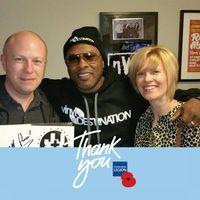 Heading to London soon to make sure we get there in plenty of time for the show. Will is already in London and Jeff has confirmed he is on his way. Should be a great show! I'll get some pictures and u

Let's hope he is straight with everything, and plenty of stories from 85 - 2000 hopefully. This is KevTastic BTW, just trialling the sign up process again for Tim

Unless you're referring to something I'm not recalling, I don't really fault him for not putting his business out in the street.  Some of the personal stuff that came out later wasn't really the publi