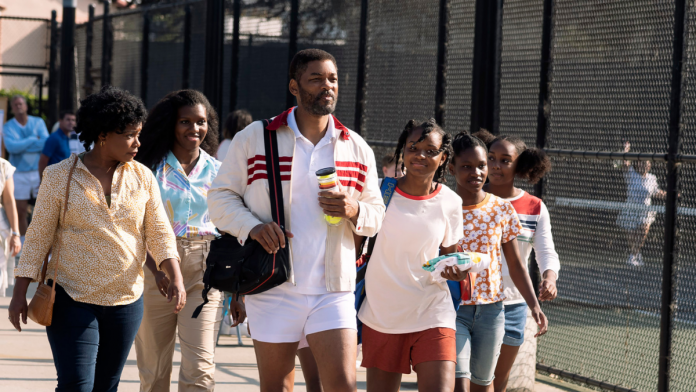 Will Smith’s new movie, “King Richard” has dropped it’s first trailer today and it’s looking very good. It has definitely aced the first step in the movie’s promotion and looks like it could be one of the movies of the year.

The first thing you notice in the trailer, is Will Smith’s voice. He has taken on the inflections of Richard Williams much the same way he perfected Muhammad Ali in Ali. Will Smith looks extremely convincing in the role, the question is will the movie focus on Richard or Serena and Venus’ rise from Compton to the biggest tennis stars in the world.

When the titles come up saying “Based on the True Story,” “That inspired the world” their is real emotional impact. I think biopics aren’t generally too popular but one on Serena and Venus Williams incredible story may buck the trend. Serena WIlliams incredible rise to tennis superstardom could draw in a lot of people who aren’t really into tennis.

Also the actresses playing Venus and Serena seem extremely convincing and they may end up being the real stars of this movie. Will playing an elder statesmen and teacher may just be the perfect role for him.

You can watch the full trailer below.

The King Richard movie is going to be released in cinemas on November 19, 2021 and simultaneously on HBO Max.

Other than Will Smith, the most well known person in the cast is Dylan McDermott. Demi Singleton plays Serena Williams and Saniyya Sydney will star as Venus Williams. Rounding out the cast is Jon Bernthal, Tony Goldwyn, Susie Abromeit and Aunjanue Ellis.

Will Smith is once again playing a real life character, Richard Williams. The father of Venus and Serena Williams will be a challenging dramatic role for Will. He has played real life characters in the past, including Chris Gardner in the Pursuit of Happyness, Muhammad Ali in Ali and Dr. Bennet Omalu in Concussion.

Now that the King Richard Trailer has dropped people are already posting their reactions to YouTube and it looks like the response is overwhelmingly positive. You can see some of the trailer reactions below:

After coming off two really successful comedy/action movies in Aladdin and Bad Boys for Life, Will has returned to a dramatic role playing Richard Williams, the father of tennis superstars Venus and Serena Williams. It is an extremely challenging, serious role for Will but based off the trailer he looks like has pulled it off. King Richard is shaping up to be one of the movies of the year.